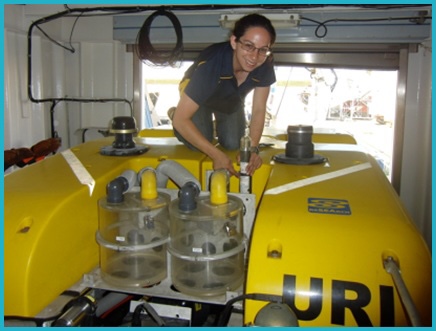 Rachel Gaines replaces a transponder on top of Hercules, a remotely operated vehicle that she maintained and piloted as a robotics technician aboard E/V Nautilus from 2011 to 2015.

Rachel Gaines has had an array of technician jobs at sea and on land since 2012 when she enrolled in a marine biology course at Monterey Peninsula College in California. At that point she had earned a bachelor’s degree in contemporary music and was employed as a wildfire firefighter. Learning to surf nudged her to think about an ocean-related career.

Since then her curiosity and hard work have helped her gain technical skills – like those she learned as a technician maintaining and piloting remotely operated vehicles aboard the Ocean Exploration Trust’s Exploration Vessel Nautilus  – to propel her career.

“Just being a constant learner is really going to take you far,” is advice – practically a personal motto – that she hopes educators will impress upon aspiring technicians. Now a hardware engineer with the Naval Air Systems Command (NAVAIR), Gaines started there as a civilian technician in 2018 after completing a bachelor’s degree in electrical and electronics engineering from the University of Southern California (USC).

Building and operating the ROV at the competition piqued her interest in ROVs, and led to her to apply to become one of MATE’s at-sea interns. She was placed on a team that maintained the two robots that scientists aboard the Nautilus use for research. At that point, she had not taken an electronics course and had little experience using power tools. Fortunately the education mission of the Nautilus meant all the professional staffers were very patient.

The Nautilus is operated by the non-profit Ocean Exploration Trust under the direction of Robert Ballard, the University of Rhode Island oceanography professor known for discovering hydrothermal vents and “black smokers” in the Galapagos Rift and East Pacific Rise and the locations of shipwrecks, including HMS Titanic and the German battleship Bismarck.

“It definitely was a huge learning experience just because it’s directly hands-on, and that’s a really good way to learn those skills,” she said. The ship’s robotics technicians rotated around the clock working four hours on and eight hours off to maximize the use of the ROVs.

She does not get seasick, but she said it took discipline to manage her time and learn how to sleep at weird hours in a small space shared by other crew members. There were also days when fixing a complicated part led right into the next shift of maintaining the robot and preparing it for the next dive.

After she figured out how “to get in the zone,” she chose to spend some of her off-hours hanging out to observe the research missions and watch how the other teams of robotics technicians worked. She describes all the technical skills she learned on the Nautilus as “super transferrable” to other work environments.

She also enjoyed learning a lot of science. “We studied hydrothermal vents, sponges. We studied oil bubbles, and oil seeps, and just all kinds of geology to see under the sea and the depths we were going. Related to engineering it was really interesting to learn exactly how these robots are able to withstand that pressure of going that deep underwater,” she said.

After her internship she was invited to come back the next four summers; eventually she was employed as a pilot of the Hercules ROV.

“I’m sure what helped me get that offer to stay or come back, was just my willingness to help out and learn on my own on my off-time,” she said. She also made the effort to get along with people, which she said was important for living and working in the tight quarters of the ship that was typically at sea for two weeks at a time with only brief time in port from spring to fall.

Here are her suggestions for aspiring technicians who are considering ocean-related careers:

“It’s not a desk job, and that was pretty exciting for me. I liked being on a ship. It was hot and dirty and you are getting sweaty all the time. You know the camaraderie you build doing that kind of work is – you build friendships really fast because it is demanding. It’s just a really good experience, if that is the kind of work that you enjoy,” Gaines said, commenting several times during the Zoom interview that she “loved it.

When the work on the robot eclipsed her interest in marine science Nautilus staffers encouraged her to earn a bachelor’s degree in engineering. She took math and engineering courses at Monterey and then transferred to USC’s electrical engineering program.

As a student at USC Gaines did a summer internship at Light and Motion Personal Lighting Systems to gain circuit design experience. She also participated in the Society of Hispanic Engineering, the Society of Women in Engineering, and Girls in Tech.

When she began at NAVAIR in 2018 it was as a technician employed as a contractor. Now as a civilian Navy employee with the title of engineer she works on research and development projects that sometimes involve autonomous unmanned vehicles (AUVs) – the Navy’s name for remotely operated aircraft.

This work has led to her current interest in coding and learning the latest software languages to supplement her knowledge of C++. The Navy makes online and in-person learning opportunities available and provides tuition reimbursement if she wants to enroll in a master’s degree program.

“I don’t feel that I’ve reached my highest point career-wise or education-wise yet, but through coding and what I’m doing now I’ve found other interests – like web design. It is something I never thought of as an interest and, then just through coding and working on the computer, I’ve found that is cool. That is something else for me to learn,” Gaines said with a smile.