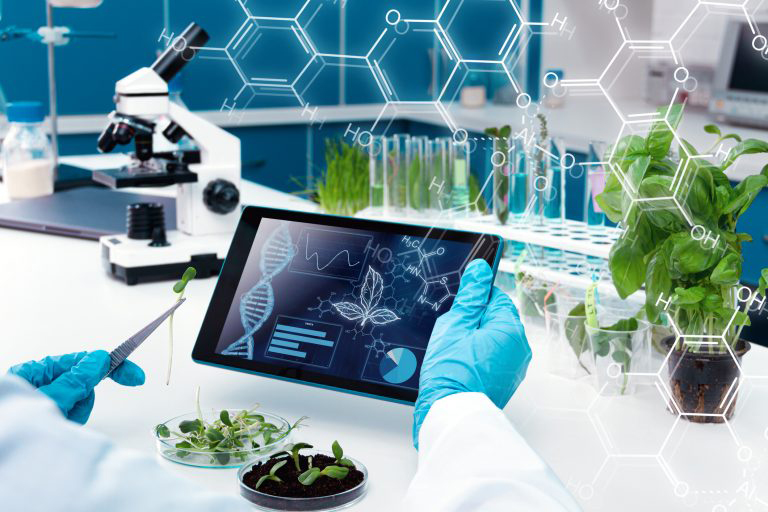 Entrepreneur and PhD physicist Aaron Santos suggests community college students and faculty pay attention to the intersection of micro and nanotechnologies with biotechnology, and the emergence of their use in sensors and other new devices.

“My prediction is that you’re going to see what happened with the programming and software startups that you saw popping up in the 90s. I’m predicting that you are going to see a similar effect with some of the biotechnologies that are coming out now,” he said.

He pointed to the CRISPR gene editing technique and the processes for coating DNA and other bio-molecules on to nanoparticles as examples of emerging technologies that are beginning to be used for genetic detection and differentiation of proteins.

Santos says the products that have emerged so far provide nice ways “to detect things like disease markers and genetic variations.”

DNP123 Co.—the startup that he and Derek Lyons founded in Iowa—has a patent pending for DNA-patched nano-cubes that self-assemble designable structures. Its website states that its process “affords a simple, standardized method of assembling almost any three-dimensional structure at nanoscale.”

Santos anticipates that the DNP123 process will first be used to identify the genetic makeup of plants and seeds. He envisions it being useful for farmers checking crops and agriculture technicians checking shipments arriving at grain elevators to see if they meet particular standards such as the European Union’s strict limitation on genetically modified organisms.

The ExpresSeed platform is the product that uses DNP123’s process that is being commercialized by NanoBio Designs, LLC. Lyons is a chemistry professor at Simpson College, at the private liberal arts college in Indianola, Iowa, and Santos taught physics there when they started the company.

Santos also predicted that as genetic detection devices become less expensive and more accessible—thanks to nanotechnology innovations—the amount of data that farmers and technicians will need to analyze will expand.

When Santos spoke with community college students during the 2020 Virtual ATE Conference he advised them to prepare to do data analytics regardless of the field they enter.

People who want to focus on nanotechnology need to go beyond data analytics to use data science solution learning, which involves the application of machine learning. “I think that is the next phase of anything coming out of the nano side,” he said.

For anyone who wants to work in the interdisciplinary field of nanobioscience, he has a more specific recommendation: earn a degree or certificate in biotechnology.  “Because that is definitely a growing field,” he said.