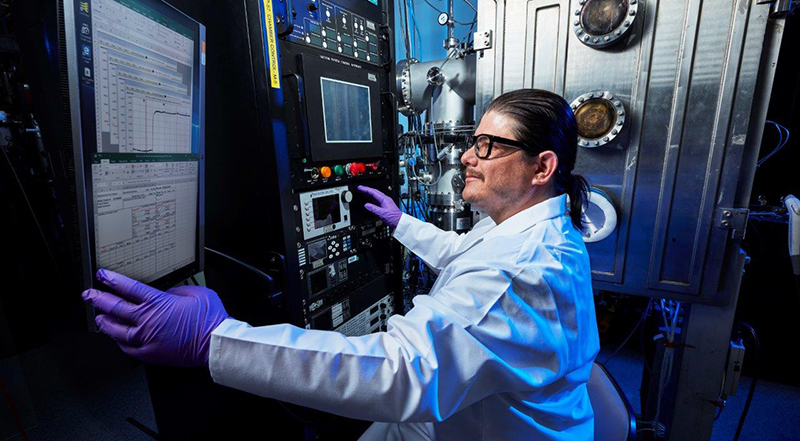 At LLNL Correa Barrios designs, builds, operates, and maintains vacuum systems that take air and gas contaminants out of stainless steel vessels to create sterile environments. The empty vessels are back filled with ionized argon, which bombards the metals placed in the vessels and results in physical vapor deposition on items. The process of depositing thin films, also known as sputtering, can take just a few minutes or a few days depending on the thickness of the deposition.

“Some of these films are so thin, so small – tens to hundreds of angstroms thick so we’ve got to be as precise as we can….If the tool is off, if the sensor cannot read accurately what the deposition rate is, we can be way off on our film thicknesses. Even the quality of the film is compromised if the equipment isn’t reading right. If an experiment doesn’t go well – they don’t get the data they need and it pinpoints to a bad film that we made, yes, that’s money lost,” he explained.

How He Got Started

In high school Correa Barrios liked drafting. “I wanted to do something more artistic but not art. Drafting was kind of that medium.”

His first job was as a draftsman for L&P Machine, a machine shop where he learned to use every machine on the shop floor and how fabrication processes worked. His second job was with Pak-Master, an engineering firm that designed automated packaging equipment. There Correa Barrios learned the automation side of fabrication and manufacturing.

“For me, academics weren’t my strongest suit, or it wasn’t a top priority,” he said, adding he preferred the “distraction” of the new equipment on the machine shop floor. “At the machine shop there were all these new machines and processes that I wanted to know. And I wanted to know them all. So I would just devote as much time as I could to learning manufacturing and [would] try do school work when I could.

“When I worked for the engineer doing automated equipment, I tried to learn as much from him as I could. So I was always trying to learn what I could, but my actual, true academics was kind of pushed off to the side.”

After completing his associate degree in 2010 he continued taking courses toward a bachelor’s degree in mechanical engineering. One of his professors suggested he apply for an internship at LLNL.

The internship led to a contractor position at the LLNL, and then a full-time job. Correa Barrios liked the hands-on work he saw technicians doing at the lab and set aside his baccalaureate engineering degree plans. “I don’t like to do one thing repetitively all the time, and what appealed to me was being able to design something, being able to manufacture it myself, and implementing it, and working with the engineers and scientists to create novel solutions.”

How the Certificate in Vacuum Technology Accelerated His Career

In 2016 Correa Barrios was offered a technician job in the Advanced Coating and Vacuum Process Lab because of the breadth of his skills, Chesser said.

He took the vac tech courses from Normandale during work days in 2017 and 2018; LLNL covered the tuition and textbook costs. Correa Barrios said that before he enrolled in the certificate program he operated the vacuum systems as he had been told to do by supervisors without fully understanding the technology.

He said the Normandale courses “gave me the foundations for what I was doing. You know because at work we don’t necessarily have time to dig deep into the math behind how fast the pump can pump down a specific volume or the conductance lost between tubes, between pipes. We learned the foundations in that class and it definitely helped me understand it a lot better.”

He has found the troubleshooting skills he learned to be particularly helpful. “It definitely gave me the skills I needed to push myself to the next level. It helped me move up,” he said.

“With all the things that he has in his toolbox, he can speak with the customer; go over what they want to do. Let’s say they need a fixture remade. He can design the fixture because he has Solid Works experience. Now he can make the print. Because he also has machine shop skills, then he can go in the machine shop and fabricate that fixture…If the part needs to be welded he can do that, he has welding skills.”

He has witnessed Correa Barrios explain his calculations to engineers, as well as troubleshoot and repair vacuum systems.

“He can do from start to finish,” Chesser said.